Excellent product!! My son is totally into ww2 history, plus some fun!!!

Definitely a display item and not a toy. Not recommended for ADD or ADHD folks.

My grandson has loved all of the lego sets we have ordered. He thought the sidecar was pretty cool.
5 stars & great customer service!!

No missing pieces and set assembled no problems as per instructions. The T92 Tank was an innovative American light tank developed in the 1950s by Aircraft Armaments. At 18.5 tonnes, 5m length, it was designed as an airborne/airdropped replacement for the 5 tonnes heavier M41 Walker Bulldog.

Great detail,fun to build, took a few days wich i like. Only i think the instructions could be a little more detailed in some areas took a few times to figure out some stuff but gotter done. Love the tank looking to buy others.

My 9 year old son absolutely loved the WW2 men and the all extra things I things I got him especially the Tiger tank. He plays with them all non-stop. I am highly satisfied with my purchase but one of little gun or armament boxes was sent damaged to us. I sent you an email with a picture of it and haven't heard back from you on this issue. The lid doesnt go on the box because the edge is bent. But even with that I'm still highly satisfied with spending over $500.00 on your product. Thank you for creating this unique WW2 product. 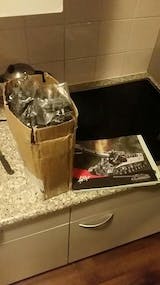 A
A.B.
Haven't build this one yet, it's monstrous, comes with mini-figures too!