Its a fun kit to assemble, in my experience you can't go wrong with a kit from the Brick armory!

Everything we’ve ordered from Brick Armory has been fantastic. This Normandy Landing Craft gave our son heart eyes, as well as the other builds we purchased from this company. There was 1 hiccup in our order and BA’s customer service took care of it immediately. So happy we found this shop, you guys rock! You will not be disappointed with these builds and minifigs! 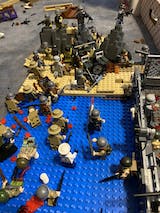 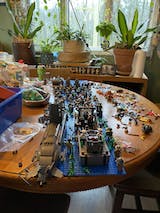 I was thrilled to find a set of soldiers at an affordable price. My son loved his Christmas gift and plays with them daily. Thanks for offering a great product at a great price!

The Panzerkampfwagen IV (PzKpfw IV), widely known as the Panzer IV, was a medium-sized German tank produced in the late 1930s and used extensively during the Second World War. His ordnance inventory designation was Sd. Kfz. 161. 161.

The Panzer IV was the largest German tank and the second-most numerous German armored combat vehicle of the Second World War, some 8,500 of which were built. The Panzer IV chassis was used as the basis for numerous other fighting arms, including the Sturmgeschütz IV assault rifle, the Jagdpanzer IV tank destroyer, the Wirbelwind self-propelled anti-aircraft gun and the Brummbär self-propelled gun.

While the Tiger I was considered an excellent concept for its time, it was often considered over-engineered, using costly materials and labour-intensive manufacturing methods. The Tiger was vulnerable to some types of track faults and accidents and was reduced in depth due to its high fuel consumption. It was expensive to maintain, but generally mechanically reliable.

In the North African Campaign, Tiger I saw the first action during the Tunisian Campaign on 1 December 1942 east of Tebourba, when three Tigers attacked an olive grove 5 km west of Jedeida. The thick olive grove made visibility very limited and the enemy tanks were engaged in close proximity.